Couldn’t manage to find the time since to post anything about Episode 10 or 11 until now, so here I am, two weeks behind on this. I’ll be posting some wrap-up thoughts from Avery on the finale to kick off the discussion shortly, and then I will likely follow that up with a second post with from me with a combined post-mortem on Episodes 11 and 12, and Tony’s return as a whole, so stay tuned for that!

Once again, we got one short scene with Tony. Still not much in the way of a substantial role in the story or conclusive answers to my long-standing questions about what happened to him between the events of Solitary and Legacy, although at least this scene did provide a few more clues to sift through on the latter front. So what’s up with Tony as revealed by Episode 10?

He’s definitely a freelance contractor doing who knows what for God knows who, but he is obviously known to government operatives and operates openly in front of them as well, even if he breaks the law. It seems like the gov’t sometimes hires him to do things they can’t do directly. He’s not a fugitive. However, it is necessary for him to use a fake identity while traveling abroad. I’m not sure if that’s because the Americans want to keep him in or because other countries want to keep him out due to his criminal past, or because he just doesn’t want anyone to know his comings and goings. I REALLY want to know about the circumstances of his leaving prison! We know he worked with closely with Rebecca in Yemen a year ago, which has him out of prison for at least that long, probably longer.

While clearly in a much different place than I could ever have imagined the character would be when we first encounter him in Season 1, he’s been through some grim shit now. It’s clear he is no longer bound by any agency’s or government’s idea of morality, but solely by his own. That said, he does still have some kind of ethical code when it comes to those he is close to, as hard as that might be to believe after his betrayal of Jack. He seems to have hardened somewhat and started focusing more on the money, though he seems less bitter than in Solitary and certainly less than in Season 7. I believe he genuinely cares about Rebecca, and thus was willing to sacrifice a lucrative job to help CTU locate her — even though his motorbike-riding lady friend was none too happy about it.

It doesn’t really seem like Tony is really that into his lady. She is being clingy because she is threatened by Tony’s history with Rebecca, and she is annoyed that he is prioritizing Rebecca over whatever it is the two of them have going on. But Tony gives zero fucks.

Before CTU interrupted him, Tony was on his way to London (implied by Sidra who mentions Stansted Airport).  Incidentally, the name of Standsted Airport was misspelled in the subtitles. Pretty sloppy! 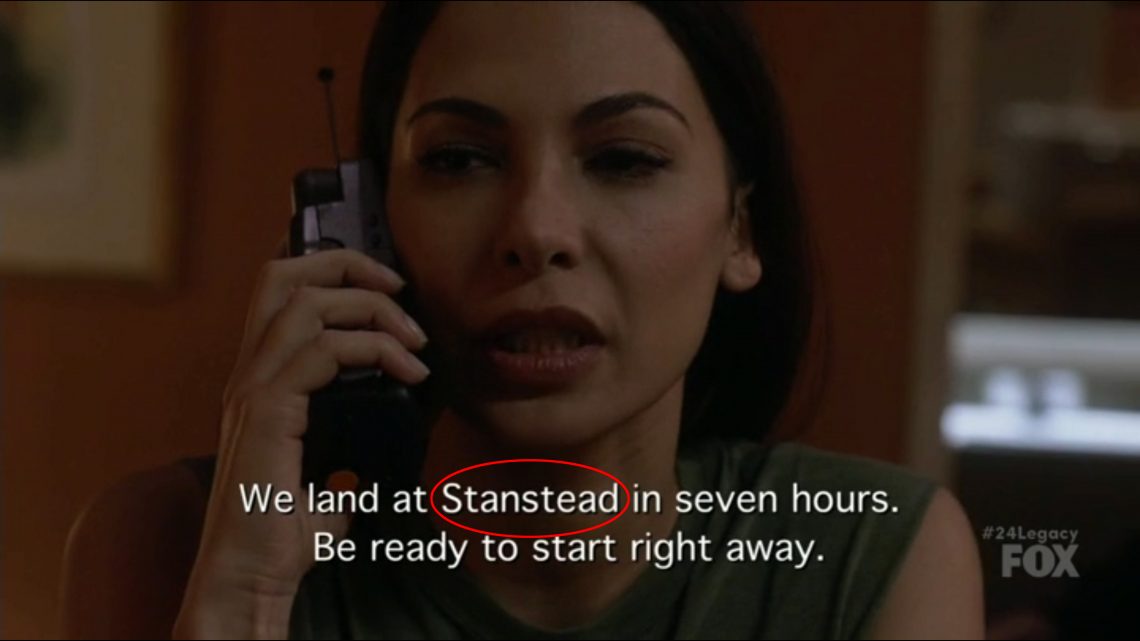 That’s about all I have on this one. Next post will be far more interesting!