No video debrief this week, plans fell through at the last minute. Better luck next week! So where were we?

Previously on 24, Jack headbutted Kate Morgan and I decide to officially add “Jack Bauer headbutts somebody” to the drinking game, thereby escaping from the CIA for the second time like he’s stepping out for milk. We pick up as Chloe helps him track Fake Russian Mail Order Bride and the hacker she’s been dangerslutting to a pub (in England, even Americans must call them pubs instead of bars) because apparently stopping for a leisurely pint is the thing to do after narrowly eluding capture, killing 4 people with an override device that can hack weaponized drones, and plotting a hit on the POTUS. Jack finds the hacker, Derek Yates, dead in the bathroom and quickly figures out he was double-crossed by the (fake) blonde, who has stolen his briefcase. There is another player involved. Chloe tracks their suspect, sans wig, to a nearby tube station (in England, even the Americans must call them tube stations instead of subway or train stations) and Jack jumps into their Volvo looking to beat her to the next stop. At first I am confused as to why Chloe is driving, then remember that we are in England and the steering wheel is on the wrong side of the car.

Chloe figures out which tube car she is in and Jack boards and identifies her, but the suspect recognizes him and prepares to flee at the next stop. Jack pulls his gun on her, but she slashes herself through her fishnets and smears blood on her face, pretending she’s been attacked, then escapes in the ensuing milieu as incensed British tube riders play the hero. Chloe is waiting outside in the Volvo to pick up their suspect’s trail, but gets distracted by a young family at the exact moment the suspect walks past her car. We know that Chloe is having an intense emotional moment because the slow sad reminiscent music plays. When Jack returns to the car, we learn that Morris and Prescott were killed in a car crash, which Chloe believes was actually an attack on her — she was supposed to be driving. An attack she believes is linked to Jack’s disappearance. So we now know what drove Chloe to all the tattoos and black eyeliner (which I fully support, btw) and leaking state secrets. Alas, Morris. The scene was well-acted by MLR. Don’t ask me why but when Jack is all “Chloe, c’mere” and hugs her, I felt slightly uncomfortable. I’m not sure if I’m just not buying Jack’s empathy or what. Maybe it’s just that he’s desensitized to tragedy at this point in any real way. Anyway, Jack reminds Chloe that innocent lives are at stake (drink) and she agrees to continue helping him.

They identify Fake Russian Mail Order Bride as Simone Al-Harazi, daughter of Margot Al-Harazi, a British national who was radicalized by her deceased husband, a member of Al-Qaeda recently killed in an American drone strike. It’s all starting to make sense now. Al-Harazi’s husband was killed by a drone and now she wants to kill the POTUS with a drone in the interests of poetic justice. At least, that’s what it seems like now but this is 24, so there will surely be a twist coming up re: the motives of the assassination plot and who else is involved. The only question is, will the mole be someone inside Heller’s administration, or someone inside the CIA? Or perhaps the accomplice is Chloe’s “friend”, Adrian Cross. More on that later.

As Simone arrives back at the Al-Harazi base of operations to check in with Mommy Dearest, we get our first glimpse of Michelle Fairley as Margot, and she does a pretty good job of playing a stone cold bitch whose very voice cuts into our hearts like a black knife. It’s obvious this woman has everyone around her under her thumb, probably because she’s scary. Simone is giving off a Marie Warner vibe. Her brother is obviously the head techie in their family affair, and she’s married to a middle Eastern man who at first seems like he’s bitter that she had to sleep with Yates in order to complete her mission, but later we learn that he’s not really bothered by his wife’s dangerslutting ways — what’s really bugging him is the idea of killing innocent people. He’s having second thoughts. As Simone soothes his conscience with sex, we realize that Mommy Dearest is spying on them while they do it, has heard their entire conversation, and doesn’t trust him anymore. Uh-oh. Someone’s gonna die. And, this is very creepy. Terrorist operative or not, every family needs some boundaries.

Meanwhile, Kate Morgan and her CIA partner, whose name I can’t remember right now, have rounded up all the shady-looking dudes from the housing project where Yates was holed up, hoping someone can give them information on where Bauer might be headed. Their boss orders them to move out, but Morgan ignores him and coerces her partner to kidnap the head shady-looking dude so they can interrogate him. They threaten to hand him over to his enemies in a rival drug gang unless he talks. The suspect is too dumb to realize they would never actually do this, and tells them all he knows is it has something to do with Tanner, the pilot framed by Yates for the drone strike. When their boss finds out what they did, he is displeased by their methods but agrees to let them talk to Tanner. There was a Tanner in Season 7, wasn’t there? Alan Tanner? He was working with Tony, and Renee Walker tortured him. Anyway, what I am wondering right now is whether this whole thing about Kate’s husband being a traitor and she tainted by association is actually going anywhere. Is it just backstory to lay foundation for why this character starts out as emotionally damaged and desperate to prove herself by catching Jack, or will this tie back to the main story arc somehow? Because they’re laying it on pretty thick, it has come up in every episode so far.

Checking in with President Heller and his entourage. Audrey is pissed at her husband Mark for being harsh to her dad about the whole speech to British Parliament thing. Mark tries to convince her that back channels is the way to go because all the MPs will be too angry to listen to Heller right now, but I’m not paying very close attention to what he is saying because I’m distracted by how dry his lips look. Someone send an intern out to the drugstore for some chapstick, stat! Anyway, Audrey agrees to talk to her father, but he realizes quickly that Mark put her up to it and insists on giving his speech. When he arrives at Parliament, the Prime Minister also tries to talk him out of what we now know is going to be a very bad idea, but instead Heller invokes Churchill (which is kind of arrogant, considering he is comparing himself to Winston Churchill right after an American drone accidentally killed a British soldier, to the British PM no less) and again insists on proceeding. Turns out that British Parliament is just not that into him, as they don’t clap for him as he approaches the podium and they interrupt his speech three words in, bombarding him with questions about how he plans to address the drone situation. Impolite, but understandable. Heller looks confused as it dawns on him that British people are mean and really pissed off at his country. 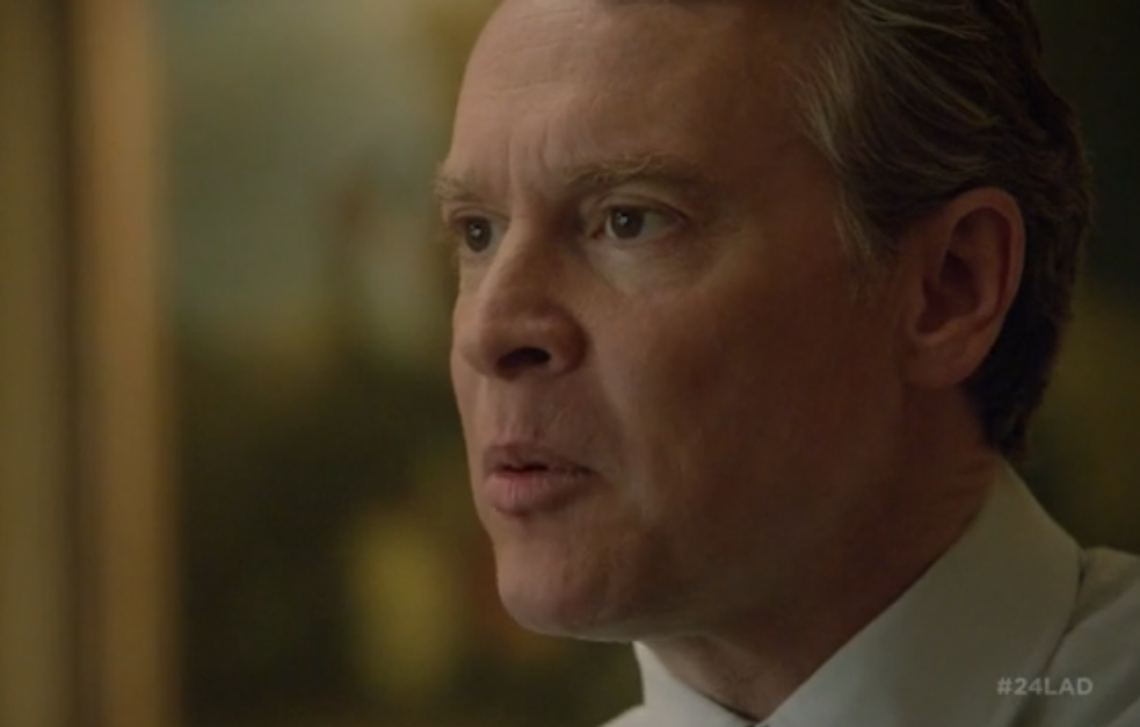 Someone get this guy some Chapstick, stat!

By now, Jack and Chloe have returned to Cross’s base of operations and Jack wants Open Cell’s help in faking credentials to get into the US Embassy so he can show the evidence of the assassination threat to Heller personally. Cross agrees, but not before he calls Jack out for asking for “favours” at gunpoint. However, with Jack and Chloe out of earshot, Cross instructs his other lady hacker to put an invalid code into Jack’s fake credentials, which will alert embassy security and get Jack arrested. So, does Cross do this because he feels threatened by Jack’s presence around Chloe and his organization? Because he wants to disrupt Bauer’s plans to help the American government in any way? Or because he’s in on the assassination plot and needs to ensure it happens? Is he just playing power games with Bauer, trying to show him who is in control? It could be any of this.

Anyway, Jack tries to use the fake credentials to enter the embassy, but they fail, as Cross knew they would. Chloe realizes at the last second by the guilty look on the other lady hacker’s face that Cross screwed Jack intentionally and tells him to get out. An ornery protestor outside the embassy creates a diversion and Jack slips away, but he has to ditch his man bag in the process. Let’s see how many episodes go by before he acquires a new one. Morgan and her partner screech up just as Jack fires his gun into the crowd to incite a riot. Morgan spots him, and gives chase, dramatically yelling “Bauer!”. Boop beep.

Theories on upcoming action: Jack will make it into the embassy by headbutting and pistol-whipping his way through security. He will sneak into Heller’s office and there will be an electric character moment as we see Heller react to seeing him. After the shock wears off, Heller will be hella pissed that Mark didn’t tell him about Bauer’s return sooner. Audrey will bust in unannounced as Jack is trying to tell Heller about the assassination plot. There will be an electric character moment as they react to seeing each other. Mark will feel the tension in the air and immediately become insecure and petulant as he realizes in that one moment that deep down his wife has never stopped loving Bauer. Margot will get antsy about her son-in-law’s loyalty and have him killed, which will cause her daughter to turn on her and begin cooperating with Jack and/or the CIA. Kate will figure out that Tanner is being framed, but in typical bureaucrat-style, none of her superiors will believe her and she will have to go rogue. Her partner will struggle with whether to help her or follow orders. We will also find out whether or not Chloe has ever had sex with Cross (I sincerely hope not).